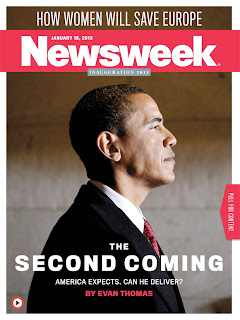 During Barry’s first run in 2008, the establishment media went out of its way to portray him in messiah-like fashion. Women swooned and fainted at his campaign events. Bedazzled followers were so mesmerized by Brand Obama’s scripted message and performance they came away thinking the onetime foundation-supported community organizer was going to pay their rent and save them from evil Republicans.

Now that the people – with the help of jimmy-rigged voting machines – have “re-elected” Obama for a second term as the establishment’s official teleprompter reader, the corporate media is once again attempting to convince us Barry Obama is the Son of Man coming on the clouds of heaven with power and great glory.

Newsweek has published a magazine cover announcing Obama’s “Second Coming” as if just last week he sat at the right hand of the father. No doubt this allusion is deeply offensive to Christians, but then the establishment media regularly portrays Christians as neanderthal throwbacks who cling to their guns and bibles. Read more....
Posted by Economic Analyst at Monday, January 21, 2013