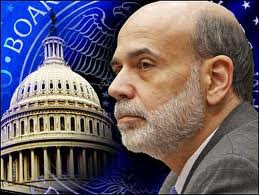 Ben Bernanke is usually looked up to by everyone as the man who can fix everything and anything. So, whether he twists, turns or does the salsa, hapless market traders look to him for direction. On Thursday, Bernanke triggered a global market meltdown by officially accepting what Christine Lagarde of the IMF said last week — that the world economy is entering a seriously “dangerous” phase.

Global markets are not impressed with the band aid programme of major Euro zone or US players, and are expecting more from the G20. Inboxes of all business analysts — and journalists — on Thursday resound to gloomy market private sector data from both Germany and France — the Euro zone purchasing managers index dropped to the lowest since 2009; A UK CBI industrial confidence survey dropped from positive to 9 (negative) in September from August 2011; Germany manufacturing indices are at 26-month lows; The Bloomberg consumer comfort index fell by nearly 3 points to 52.1, the lowest since July 2009, according to Newedge Research.

“Not only does Ben Bernanke signal yet again that he has no clue — or even worse no potent weapons — to combat the second round of double-dip fears in little over a year. With the Fed launching ‘Operation Twist’, Bernanke furthermore runs the risk of arriving too late at the party with a solution for the second time in 10 months. It is time to allow the economy to heal on its own,” says Mads Koefed, Macro Strategist at Saxo Bank.
With world stock markets falling between 3-7%, the mood at the epicentre of the crisis is grim, grimmer, grimmest. The alleged BRIC plan to bail out the Euro zone, a policy that India has been lukewarm to, has dominated world economic discussions these days. Robert Zoellick, president of the Wold Bank, pointed out that emerging economies, India, need to work together to reboot the world economy. The UK has been watching the Liberal Democrat conference and the media is awash in various degrees of horror and shock that both Nick Clegg, deputy prime minister, and Vince Cable, business secretary, chose to ignore spin doctor mandates, ignore the “sunny uplands” and focus on the grim “Darkling Plains”. Strip all the Eng Lit poetics — they both said, bad times, worse times to come, no choices. In Europe, people are resigned — Greece and the Euro zone is boring the daylights of normal people; their own troubles are hard enough.
Posted by Economic Analyst at Friday, September 23, 2011