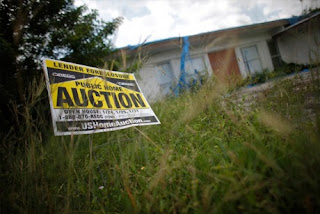 The Fed releases brutal details on how the crash sucker-punched America. So why won't it do anything?

For economy watchers, the title of the report released Monday by the Federal Reserve, “Changes in U.S. Family Finances From 2007 to 2010: Evidence From the Survey of Consumer Finances,” must inspire a feeling akin to what drivers on the highway experience when they see the twirling lights of police cars on the side of the road near the scene of a major accident. You know you shouldn’t stare, and you know what you see might make you sick, but you nevertheless end up rubbernecking anyway. It’s human nature — we can’t stop ourselves from goggling at disaster.

And so it is with the Survey, which the New York Times’ Binyamin Appelbaum calls ”one of the broadest and deepest sources of information about the financial health of American families” that we have. One look at the title tells you all you need to know: Here, in all their gory detail, will be found the brutal details on what happened to Americans in the immediate aftermath of the worst economic disaster since the Great Depression. Read more.......
Posted by Economic Analyst at Wednesday, June 20, 2012