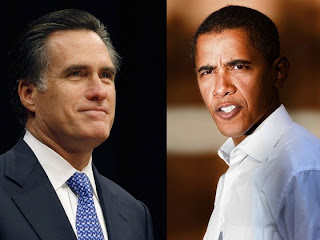 President Obama and Mitt Romney are locked in a tightening race for the White House with just 150 days to go before Election Day.

Polls show the two dead even nationally, with Obama enjoying perhaps a slight edge in the dozen or so swing states that will decide the contest.

Yet the president’s reelection hopes have been dimmed by a dismal few weeks capped by a bleak jobs report and the president’s own gaffe on Friday at a hastily arranged press conference where he said the private sector is “doing fine.”

Obama was forced to walk back the remark just a few offers later after realizing he had served up a political gift for Republicans, who immediately seized on it to highlight their argument that Obama is not in tune with the public.

“I think he's defining what it means to be out of touch with the American people,” Romney said a few hours later. Read more......
Posted by Economic Analyst at Wednesday, June 13, 2012