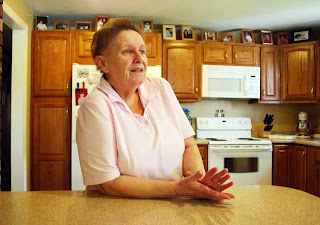 Sixty five year old Jackie Whiton, a cashier at a local convenience store, was in hot water with her boss recently. Apparently, she refused to sell cigarettes to an individual who attempted to pay for them with his Electronic Benefits Transfer card (the government’s preferred method of nutritional food assistance). Ms. Whiton didn’t realize that EBT allowed card holders to not only purchase food, but cigarettes and alcohol as well. When she was made aware of the law by her boss, she held fast to her position, telling her boss that she would refuse to sell cigarettes to anyone attempting to make payment with EBT/Food Stamps.

She was promptly terminated.

Ms. Whiton maintains that she’s all for the government’s nutritional food assistance program – when it’s used to for essential goods… like food:

“This is what the taxpayer’s hard-earned dollars are going toward,” she said. “There are a few people of course who are against me, and they are probably card holders.”

“I am not against the EBT (food stamp) grocery cards. I am not,” she said. “But a woman can’t even buy toilet paper or tampons with those.” Read more.....
Posted by Economic Analyst at Tuesday, July 10, 2012