Taxes Vs Debt: Where Does US Funding Come From - Chart Of The Day 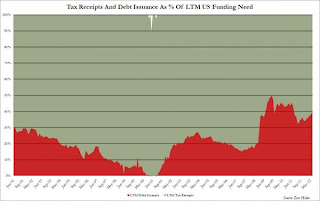 A key sticking point in the ongoing presidential debate is what happens to US tax rates, either for just those making over an arbitrary $250,000/year, aka "the rich", or for everyone. To put this debate into perspective, here is a chart that shows how over the past 20 years the US funding needs (demonstrated previously here), have been met in terms of the only two components of US funding - tax revenue and debt issuance.