Why Is the U.S. Government Funding Islamic Terrorists Who Are Killing Christians? 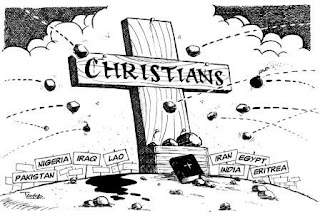 Most Americans are Christians.

But few know that the acts of our American government are leading to the persecution of Christians in numerous countries.

According to the Vatican’s official news service – Fides - and many other Christian news sources, the Syrian opposition is targeting Christians. Priests and bishops on the ground in Syria confirm these reports.

As a Syrian priest writes in the Guardian:

Despite what you might read in much of the western media, Syria is an enlightened,secular society with a deeply spiritual core and the common belief is that Syria is for everybody. A fundamentalist state would destroy the traditions of co-existence and religious harmony that have existed here since the fall of the Ottoman Empire nearly 100 years ago. Syrian independence was won with the blood of all Syrians – Muslim, Christian, Druze, Alawite and Kurdish.

Syria has for much of the century had a sizeable Christian minority, making up at least 10% of the population. Read more.....
Posted by Economic Analyst at Tuesday, August 07, 2012