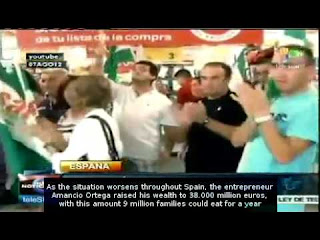 As the economic and financial systems of the world rapidly approach the real possibility of total collapse, signs of what we can expect on a mass scale in the near future are beginning to appear throughout Europe.

In Spain, a country that just a few years ago was heralded as a shining example of real estate entrepreneurship, international tourism and a rising middle class, the situation is so bad that many are unable to meet the most basic necessities for life.

Social safety nets across the continent are visibly under stress and breaking down, so much so that unemployed Spaniards have begun raiding supermarkets in order to put food on the table. As recently as last month the people of Cadiz and Sevilla, which have a reported unemployment rate of 32%, joined together to loot local grocery stores of three tons of food - some of which was distributed to local food banks: Read more......