Obama Has Stolen $5.3 Trillion From Our Children In Order To Make Himself Look Good 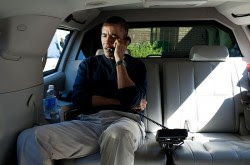 Barack Obama has destroyed the future of America in order to improve his chances of winning the next election. Under Obama, 5.3 trillion dollars has been ruthlessly stolen from our children and our grandchildren. That money has been used to pump up the debt-fueled false prosperity that we have been experiencing. When the U.S. government borrows money that it does not have from someone else (such as China) and spends that money into the economy it is going to make our economic numbers look better. Even if the government spends that money on incredibly stupid things, it still gets into the hands of average Americans who in turn spend that money on food, gas, clothes, etc. If we were to go back and take that extra 5.3 trillion dollars out of the U.S. economy, I guarantee you that we would be in a rip-roaring depression right now. We would look a lot like Greece at this point.

For several years Greece has been raising taxes and cutting government spending in an attempt to balance the budget and these austerity measures have resulted in an unemployment rate of over 23 percent and an economy that has contracted by close to 25 percent. Most Americans don't want to go through pain like that so they are okay with continuing to financially rape our children and our grandchildren. Just imagine how you would feel if your parents died tomorrow and you found out that they had left you with a million dollar debt that you were legally obligated to pay off. How would you feel, knowing that you had just been sold into debt slavery for the rest of your life? Well, that is how our children and our grandchildren are going to feel.

We are destroying the greatest economic machine the world has ever seen, we are accumulating the biggest mountain of debt in the history of the planet, and the coming economic collapse that we have caused is going to wipe out the promising future that our children and our grandchildren were supposed to have. If they get the chance, future generations of Americans will curse us bitterly and will spit on our graves. What we are doing to our children and our grandchildren is the kind of stuff that horror movies are made of. You should be ashamed of yourself America. Read more.......