Here's The Biggest Problem In The American Economy 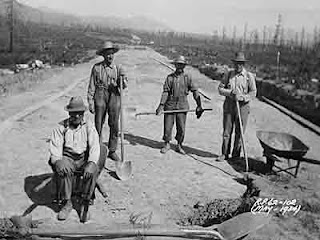 Several factors have come together to produce a frustratingly weak economy that has persisted in the U.S. for more than a decade:

"Globalization" has opened up a vast pool of billions of workers who work for much less than Americans. This, in turn, has resulted in companies shifting formerly middle-wage-paying jobs overseas.

Technology has continued to increase productivity, allowing companies to do more with fewer employees.
Average hourly earnings have been flat for ~50 years (after adjusting for inflation), as companies steer their wealth primarily to senior management and owners at the expense of average employees.
Tax policies have increasingly favored investors and high wage earners over middle-class and upper-middle-class wage-earners.
An obsession with "shareholder value" at the expense of other stakeholders (namely, customers and employees) has led companies to cut employee costs to the bone.

These and other factors have contributed to the most radical redistribution of wealth that the United States has ever seen. Since the late 1970s, the country's assets and income have moved steadily from "average" Americans to the richest Americans. This has created a society with more extreme wealth inequality than we have seen at any time since the 1920s. Read more....
Posted by Economic Analyst at Monday, October 01, 2012