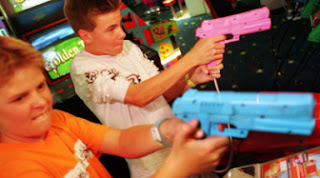 In the wake of the Newtown tragedy, Americans immediately responded in the way we often do – emotionally looking to scapegoat someone or something and react in a completely knee jerk fashion. As a country, we have decided we can control anything through legislation and when that bubble is burst by the actions of a truly insane individual we struggle to make the realities of life fit into our cultural narrative.

In the wake of the Sandy Hook horror, the media has scapegoated violent films and video games as a possible cause for the rise of mass shootings. To entertain that notion for more than a second would mean to succumb to the same level of discourse as the folks who believe the solution to all of our problems is arming the teachers.

First, there are no video games or movies that exist only in the United States. We don’t have a monopoly on Call of Duty games and James Bond films. Any amount of violence we see if available equally as freely in most every part of the world.

Second, we are not the biggest consumer of violent films and video games by far. The Netherlands and South Korea spend nearly three times as much on video games as the United States. Countries like Germany, Canada, Australia, Japan, France, and The United Kingdom all spend more on video games as well. The Call of Duty franchise alone has sold over 100 million copies while the Grand Theft Auto franchise has sold over 115 million copies. Read more....
Posted by Economic Analyst at Sunday, January 27, 2013