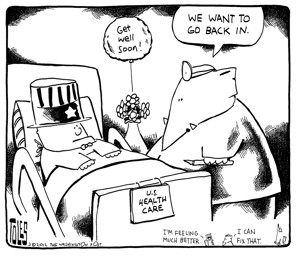 The 2012 annual report for the federal government, released last week, continues to use dubious accounting standards to avoid putting the cost of government retirement promises into the headline deficit of $1.1 trillion. But its disclosures have improved somewhat, and the new information should be read closely.

One example is the cost, in today’s dollars, to make Social Security and Medicare solvent for the next 75 years. This grew to $38.6 trillion, an increase of $4.7 trillion over the prior year. According to the report, Americans’ aging drove $1.6 trillion of the increase; the rest mostly reflected poorer-than-expected economic growth.

The Government Accountability Office noted that “the economic recovery has been slower than was assumed” and pointed to a reduction in hours worked by average Americans and an increase in the number of disabled Americans. These trends mean less revenue for Social Security and Medicare from future payroll taxes, so we need an additional $3.1 trillion in today’s dollars — or tomorrow’s income taxes — to pay for the programs.

This is not surprising. Real gross domestic product grew at just 1.6 percent annually from 2001 to 2011, and the Treasury assumes a future growth rate of 2.1 percent. But the average annual growth rate from 1951 through 2001 was 3.4 percent. Every year of slow growth decreases the amount brought in from payroll taxes. This hits younger Americans twice, with a smaller economy and higher personal income tax rates to pay for baby-boomer retirements. It’s like the Woody Allen joke about the food being terrible and coming in such small portions. Read more....
Posted by Economic Analyst at Friday, January 25, 2013