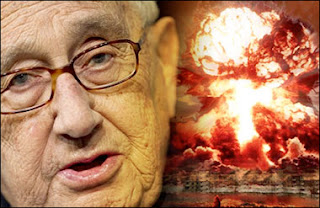 Speaking at the one-worlder confab held in Davos, Switzerland, Kissinger said a crisis involving a nuclear Iran in the “foreseeable future” will lead to a nuclear war and “a turning point in human history,” the BBC reports.
“There has emerged in the region, the current and most urgent issue of nuclear proliferation. For 15 years, the permanent members of the United Nations Security Council have declared that a nuclear Iran is unacceptable, but it has been approaching,” Kissinger said.

He then said governments will “come to a determination of how to react, or the consequences of non-reaction… [in] a few years.”

Under the terms of the 1968 Nuclear Non-Proliferation Treaty, Iran has the right to produce nuclear power for peaceful purposes. The United Nations International Atomic Energy Agency has found no evidence Iran is developing a nuclear weapons program and Defense Secretary Leon Panetta told Face the Nation earlier this month that Iran is not currently building a nuclear weapon.

In 2012 American spy agencies agreed with a 2007 intelligence finding that concluded Iran had abandoned its nuclear weapons program. “The officials said that assessment was largely reaffirmed in a 2010 National Intelligence Estimate, and that it remains the consensus view of America’s 16 intelligence agencies,” the New York Times reported. Read more....
Posted by Economic Analyst at Sunday, January 27, 2013