House Of Rothschild Hoarding Gold In Face Of Coming Collapse? 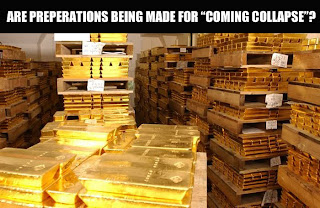 A recent appointment of Rothschild as “financial advisor” by the Board of Directors of gold exploration company Spanish Mountain Gold is yet another unmistakable indication that the ancient family is moving the world’s gold supply to both “emerging markets” and Central Banks worldwide, strengthening the family’s monopoly position when the fiat-based house of cards comes crashing down in the West.

The Board of Directors of the British Columbia based gold exploration companyappointed Rothschild to “review strategic options with the objective of maximizing shareholder value.” In July of 2012, Spanish Mountain Gold’s CEO Brian Groves boasted already that the excavation in British Colombia is a project worth “several million ounces in gold” and is backed by “an enormous network of connections globally”, Groves told Resource Clips.

Indeed, this recent appointment of Rothschild’s financial expertise (from centuries worth of experience) has increased the value of this company somewhat, propelling the gold-producing company into newer heights (or depths), depending on what end of the gold bar you find yourself. It also is a sure sign that the family is tightening its grip on gold, in both the excavation, the producing and the trading phase.

In the beginning of this century there were signs that Rothschild was starting to pull back from gold. With the announcement of Lord Jacob Rothschild that his “investment vehicle” RIT Capital Partners “has ridden the rally in gold prices but will now incrementally sell down” many observers were led to believe the ancient house was abandoning the precious stuff. Jacob Rothschild stated in 2011: Read more....
Posted by Economic Analyst at Tuesday, January 29, 2013