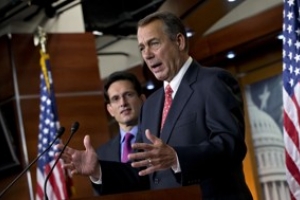 House Republicans are advancing a novel plan to suspend enforcement of the federal debt limit through May 18, a move that would lift the threat of a government default and relieve the air of crisis that has surrounded their budget battle with President Obama.

The measure — set for a vote Wednesday in the House — would not resolve the dispute over how to control the national debt. But after the traumatic “fiscal cliff” episode at the end of last year, it would buy policymakers a little breathing room to continue the argument without another economy-rattling deadline just around the corner.

The White House tacitly endorsed the proposal Tuesday, issuing a statement that said Obama “would not oppose” the temporary respite. The president has called for a long-term extension of the Treasury Department’s borrowing authority, which he argues would “increase certainty and economic stability.”

But, White House press secretary Jay Carney said, “clearly, we support extension of the debt ceiling without drama or delay.”