Are All Those Guns and Ammunition for Obama’s Civilian National Security Force? 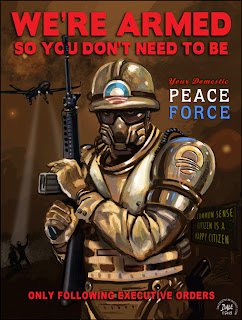 Speculation abounds surrounding the 2 billion rounds of ammunition purchased by the Department of Homeland Security and other national alphabet agencies in recent years. Moreover, as the White House and their cohorts in Congress contemplate the disarming of American citizens, the very assault weapons purported to be so dangerous in the hands of law abiding gun owners are being purchased in mass quantities by local and federal law enforcement agencies.

So what is the purpose and motivation behind the government’s continued efforts to stockpile so much firepower?

One frightening theory could explain what the President and his national security apparatus are up to.

Many of you will remember a story I broke a long time ago – about presidential candidate Barack Obama’s little-noticed announcement that, if elected in 2008, he wanted to create a “civilian national security force” as big, as strong and as well-funded as the Defense Department.

Here’s what he actually said at a campaign stop in Colorado July 2, 2008:

“We cannot continue to rely only on our military in order to achieve the national security objectives we’ve set. We’ve got to have a civilian national security force that’s just as powerful, just as strong, just as well-funded.” Read more...
Posted by Economic Analyst at Saturday, February 09, 2013