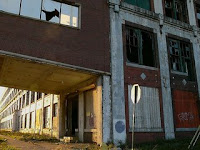 With the economy slowing and demand for new vehicles shrinking, Mercedes-Benz is offering buyout packages to the nearly 4,000 workers at its Alabama plant for the first time since the factory opened 11 years ago."We're responding to the demand in the marketplace by reducing our operations here at Mercedes Vance," said Taylor, president and chief executive of MBUSI.

No GM/Chrysler Money from the Govt. CNBC says
"The development adds a new element of uncertainty for the embattled U.S. auto industry as Detroit's political allies warn the sector faces a deepening financial crisis that threatens tens of thousands of jobs."
BMW to lay off up to 733 temporary workers

As many as 733 temporary workers at BMW’s Greer plant will be laid off in December as the German automaker begins to feel the effects of the world financial crisis.
BERLIN — The German automaker Porsche AG said Sunday it will slow production at its main plant for upgrade work at the end of the year and acknowledged that the global financial crisis had hit the auto industry hard.
Car makers across Europe are cutting production and jobs because of the economic crisis. German competitors Daimler AG and BMW AG said last month they would cut production, change deliveries or temporarily shut plants to accommodate a fall in demand.
Ford's U.S. auto sales plummeted 30 percent and Toyota's dropped 23 percent in October as low consumer confidence and tight credit combined to scare customers away from their showrooms.


Comment: My estimation is that the many of these high end car dealers will be the first to go in the coming depression. First, the rich become more frugal with their money. (that is how they become rich in the first place.) Secondly, the middles class will not be able to afford even a used Mercedes, due to the rich company becoming more frugal in keeping employees on their payroll ( LAYOFFS). The trickle down affect will become more serious as the months go by. The poor.. well they will just be happy to eat. I guess I wonder if this means we are in worse shape than the Great Depression at this point. I mean these guys survived the Depression but they can not survive this " recession"?
Posted by Economic Analyst at Friday, October 31, 2008