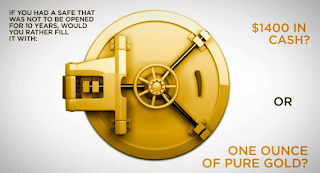 (snippet)
Daily Bell: Is the US turning into an authoritarian state?

Peter Schiff: Well, certainly, the US government is gaining more and more power. Individuals are surrendering more and more of their freedoms and their liberties. You know, in my business my boss is the government. The government hasn't let me hire any brokers in two years. I say the government but it's the regulators acting with government authority. They haven't let me open any new offices in two years. They tell me how I have to monitor my customers; because of the government I have to impose minimum account sizes, all sorts of things I have to do.
The regulations cost me a fortune. I have maybe eight people that I employ, just to help me comply with rules and regulations. The number of regulations has increased so much in my industry I never could have started my business back in 1996 if we had the regulations we have today. I could not have started my own firm because I would not been able to afford the cost of the regulations.
Daily Bell: You predicted in a 2002 interview with Southland Today, an economic downturn triggered by the bursting of the stock market bubble that would lead to a bear market likely to last another 5 to 10 years. How did you know?
Peter Schiff: When the stock market bubble burst, at the time when I did that interview, I did not know the government was going to act so recklessly. I later modified my forecast because I saw we were going to have a worse collapse. The Fed began inflating a larger bubble than the one that had just burst, thus sowing seeds for a much greater economic collapse. I really started warning about that collapse in 2004/2005 when it appeared obvious to me that the Fed had created a monster and it was going to turn on us, which ultimately it did. And then we saw a bigger collapse in 2008 and once again the Fed did the wrong thing and postponed the pain yet again until maybe 2011 or 2012. Now a far greater collapse is coming because of the continual reflation and quantitative easing.
Daily Bell: Why are you so critical of the Fed?
Peter Schiff: I am critical because there is much to criticize; they are doing a lot of bad things. They blew up the stock market bubble; they blew up the housing bubble, which brought the US economy to its knees. It has enabled the government to grow like a cancer. Instead of taking away the punch bowl, the Fed has been spiking it. The Fed has betrayed American citizens and those that run it should be put on trial. They have damaged the country more than any WikiLeaks cable. This is serious stuff what they are doing.
Daily Bell: Will there be hyperinflation?
Peter Schiff: I hope not, but there is going to be high inflation because of what the Fed has done. Hyperinflation will depend on whether the Fed continues to do what it is doing – pumping more paper money into the economy – or whether it ultimately admits it's errors and changes policy. The longer it takes, the worse it will be.
Daily Bell: Should the US get rid of the Fed? How would it be possible?
Peter Schiff: Well depends on what replaces it. We can go back to the pre-Fed monetary system, and that would be best. But if we replace it with something worse – then no.
Daily Bell: Should the world go back on a gold standard?
Peter Schiff: Absolutely. It will anyway. The question is whether the governments adopt the gold standard voluntarily or whether the public forces them into it. It definitely would be better if the government would do it on their own rather than waiting for crisis but you know how it goes.
More Here..