They Are Leaving Us To Die, Government Told Us NOTHING 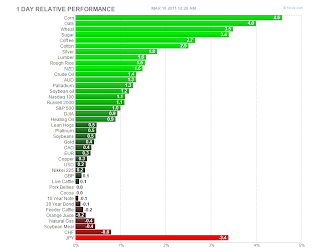 Note: The Yen is Dying on Left
Residents of a town lying within the exclusion zone around the Fukushima Daiichi nuclear plant claim they have been neglected by the Japanese government.
Minamisoma lies just 12 miles from the nuclear plant in crisis and villagers have been ordered to remain in their homes as their community lies on the edge of the state-ordered evacuation zone.
But as tonnes of water were dumped on the plant as the government attempted to prevent overheating, the mayor of Minamisoma has accused the authorities of ignoring his ‘isolated’ people’s plight.
‘They are leaving us to die,’ Katsunobu Sakarai told the BBC in a video interview.
‘We weren’t told when the first reactor exploded – we only heard about it on the TV. The government doesn’t tell us anything.’
Read more: Here..

Libya Airstrikes Could Start 'within hours of resolution'
Posted by Economic Analyst at Thursday, March 17, 2011