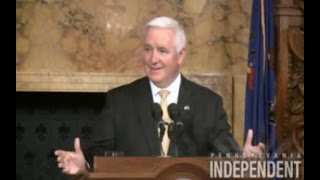 During a discussion of a far-reaching mandatory ultrasound bill, Pennsylvania Gov. Tom Corbett (R) on Wednesday dismissed off-handedly the insinuation that the measure goes too far, saying, "You just have to close your eyes."

Corbett reaffirmed his support for the "Women's Right to Know" Act, which would require doctors to perform an ultrasound on a patient, offer her two personalized copies of the image and play and describe fetal heartbeat in detail before she can have an abortion -- "as long as it's not obtrusive."

He did not indicate whether or not he considered a transvaginal ultrasound to be an intrusive procedure, which the bill would require doctors to perform on a woman whose fetus is not developed enough to be visible by a regular, "jelly-on-the-belly" ultrasound.

Asked if he thinks the bill goes too far to make a woman look at the ultrasound image, Corbett responded, "You can't make anybody watch, okay? Because you just have to close your eyes. As long as it's on the exterior and not the interior." Read more.......
Posted by Economic Analyst at Thursday, March 15, 2012