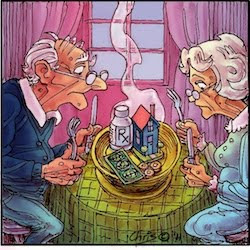 Born between 1946 and ’64, baby boomers are the children of the euphoric generation who won the last world war and established American global political supremacy. The first boomers began reaching age 65 in 2011, when the population of those 65 and older reached 41 million. About 75 million more boomers are getting ready to retire today—the largest pre-retirement market ever! In the next 18 years, the over-65 age group will expand to about 120 million.

However, as buyers of retirement products, boomers are woefully underprepared. Since 2008, they have been battered by a cruel economy. Distressed children and parents often have had to move in together. Many boomers have found themselves unable to retire until their early 70s.