Everything You Need To Know: The Economic Collapse for Dummies *Micro Documentary* 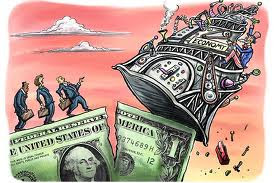 This latest micro-documentary from Future Money Trends, narrated by founder and chief strategist Daniel Ameduri, highlights the inevitably of a collapse in the global financial and economic systems.

With rampant fraud throughout the financial system and price fixing of unprecedented proportions in global stocks, commodities, interest rates, business loans, mortgages and personal loans, it is only a matter of time – perhaps one to four years according to Ameduri – before all of the machinations engaged in by governments, central banks and their financial industry cohorts to stabilize the system does exactly the opposite. The panic of 1929 will be a walk in the park compared to the utter pandemonium we will witness as the entire way of life we have come to know over the last three decades crumbles before our eyes.

As Zero Hedge notes, The Economic Collapse for Dummies is “everything you wanted to know about the inevitability of a major economic collapse but were afraid to ask.” Read more......
Posted by Economic Analyst at Monday, July 23, 2012