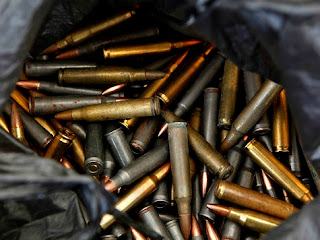 With the United Nations poised to sign an international arms treaty that would regulate global arms sales and ownership, and Congressional members just days ago attempting to sneak a nationwide restriction on “high capacity magazines” into a cyber security bill, the attack on firearm ownership in America is now in full swing.

This afternoon democrat Senators Frank Lautenberg and Carolyn McCarthy unveiled what may possibly be the most sweeping anti-second amendment legislative action in recent memory. Coming on the heels of the tragic events that left a dozen people dead and scores injured in Colorado, it’s becoming painfully obvious to proponents of the Second Amendment and individual liberty that politicians on the State and Federal level are doing everything in their power to ensure this crisis does not go to waste.

Two Democratic lawmakers on Monday will announce new legislation to regulate the online and mail-order sale of ammunition.

Sen. Frank Lautenberg (N.J.) and Rep. Carolyn McCarthy (N.Y.) said the new law would make the sale of ammunition “safer for law-abiding Americans who are sick and tired of the ease with which criminals can now anonymously stockpile for mass murder,” in a statement released Saturday. Read more....
Posted by Economic Analyst at Tuesday, July 31, 2012