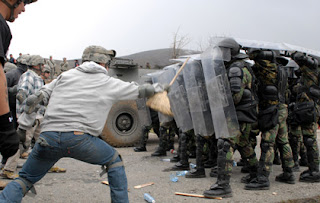 It’s not just the Department of Homeland Security that is gearing up for the prospect of civil unrest in America. The U.S. Army also recently purchased a stock of riot gear including batons, face masks and body shields.

As we reported last week, the DHS has put out an urgent solicitation for hundreds of items of “riot gear,” in preparation for expected unrest at the upcoming Republican National Convention, Democratic National Convention and next year’s presidential inauguration.

In a previous solicitation, the U.S. Army also put out a contract for riot gear to be delivered to the United States Military Academy at West Point in New York.

Fears that the U.S. military would be used to quell domestic unrest in violation of Posse Comitatus have raged over recent years. Read more.......
Posted by Economic Analyst at Monday, July 30, 2012