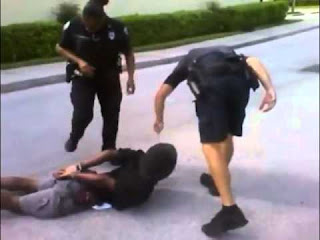 A Florida man was repeatedly tased by police officers and arrested for refusing to identify himself, but instead of apologizing, the Casselberry Police Department insisted it would use footage of the incident for training purposes.

The video begins with police accusing Zikomo Peurifoy of jaywalking before they demand to see his identification.

The officer is asked by Peurifoy what statute requires that he show his ID, to which he responds, “Give me your ID or you’re going to go to jail.”

When Peurifoy refuses, two officers grab him while the man warns he will press charges for assault because he has committed no crime. Requests for a supervisor to be called are ignored.

After cops attempt to handcuff Peurifoy, he resists before a taser is used repeatedly while Peurifoy yells, “You are assaulting me.” Read more........
Posted by Economic Analyst at Friday, July 13, 2012