Video: USA! USA! USA!: “Take the Heavy Boot Off the Throat Of America’s Job Creators and Let Them 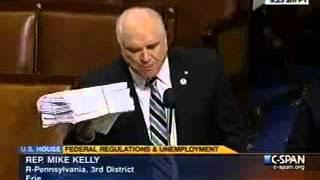 Though standing ovations and applause are forbidden by Congressional rules, that didn’t stop the House of Representatives from applauding and chanting “USA! USA! USA!” after a rousing speech by Mike Kelly (R-PA) in which he took aim at the trillions of dollars in red tape surrounding government regulatory procedures.

In an effort to sway votes in favor of HR4078, a bill that would would freeze “significant regulatory action” from government agencies until the employment rate is at or below 6%, Kelly relayed a personal story of his own business and experience, targeting the thousands of pages of regulations and laws that American business owners have to navigate in order to survive in an already contracting economy.

While President Obama claims that American entrepreneurs didn’t built their businesses, one thing’s for sure. The only role government has played – especially with behemoth legislative actions like universal healthcare and the most complex system of taxation man has ever known – is to restrict small business growth and facilitate the outsourcing of jobs to other countries. Read more......
Posted by Economic Analyst at Friday, July 27, 2012