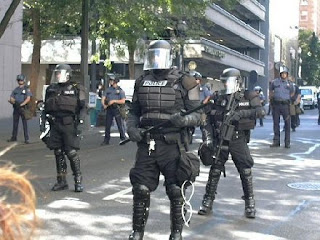 FBI, Secret Service and county police swarmed the home of Marine Brandon Raub after he posted numerous comments to his Facebook wall that were, apparently, flagged by police state Fusion centers as highly suspect and threatening.

At least a dozen local and federal law enforcement personnel raided his home and arrested him:

According to Raub’s mother, he is being held by police and will be evaluated by a State psychiatrist to ensure he is not a threat to himself or society:

Via The Daily Sheeple:

He has not been drugged for those of you asking. They are holding him until Monday when he is to appear before a Judge whom will make a ruling based on the Dr’s (Of their choosing) evaluation of his ability to function in society. Should the Judge deem him a terrorist threat and unstable he will continue to be detained for a greater length of time of which is undetermined.

I am looking into him being evaluated by an outside Dr. of our choosing. I was told that this was not possible. We are seeking legal counsel on this. We do not trust their choice of Dr.’s. He is being held for 72 hours until Monday’s hearing.

He has NOT been accused or booked for any crime. Yet, he was handcuffed, not read his rights and taken away in a police car to be placed into a Psychiatric hospital. Oh yeah, he is an AMERICAN CITIZEN. Read more.....