U.S. Army To Be Used Against “Insurrectionist” Tea Party? 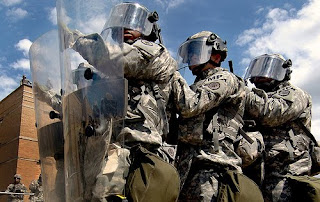 An academic study about the future use of the military as a peacekeeping force within the United States written by a retired Army Colonel depicts a shocking scenario in which the U.S. Army is used to restore order to a town that has been seized by Tea Party “insurrectionists”.

The paper, entitled Full Spectrum Operations in the Homeland: A “Vision” of the Future, was written by Kevin Benson and Jennifer Weber. Retired Colonel Benson, a seminar leader at the University of Foreign Military and Cultural Studies at Fort Leavenworth, also served with the 5th Infantry Division, the 1st Armored Division, the 1st Cavalry Division, the 2nd Cavalry Regiment, XVIII Airborne Corps and Third U.S. Army. Weber is an Associate Professor of History at the University of Kansas.

The paper begins by emphasizing how the U.S. Army’s Operating Concept 2016-2028 dictates that the military’s “full spectrum operations” will include “operations within American borders.”

A scenario in which a group of “political reactionaries,” later described as “Tea Party insurrectionists” forcibly take control of a strategic town is then outlined. Read more......
Posted by Economic Analyst at Tuesday, August 07, 2012