Austerity Sledgehammer: At Least Half a Million College Students On Waiting Lists as Loans Dry Up; Colleges Face Mass Layoffs 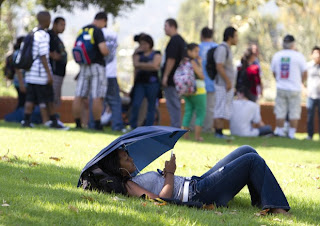 Austerity measures, though unpopular and not discussed by government officials and media pundits, are in full effect across a broad spectrum of services and industries.

In many parts of the country local governments are being forced to layoff or cut the salaries of thousands of emergency personnel. Education spending cuts across debt behemoths like California, Illionois and Michigan are forcing elementary and high school classrooms to capacities exceeding thirty or forty students at a time and removing subjects like art, music and physical education from school schedules. Towns and cities all over America are declaring bankruptcy on an almost weekly basis. Government sponsored health care systems are feeling the pressure with major cuts in access to key prescription medications quickly becoming the norm.

Just two years ago the idea that austerity cuts would hit America like an 8-pound sledgehammer was inconceivable.

Today it’s become quite apparent, especially for those just entering college or returning to higher education in an effort to learn new skills for a dying or dead jobs market.

In addition to nearly $1 billion in state funding cuts for college students, the progressive State of California and others are now facing massive jobs cuts and salary reductions across the board. Read more.....