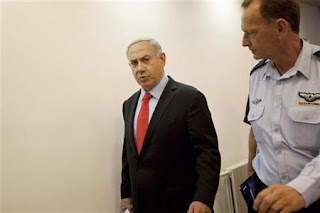 Israeli Prime Minister Benjamin Netanyahu will set out, in his speech at the United Nations on Thursday, an ultimatum for Iran to halt its disputed nuclear drive or risk coming under military attack, an Israeli official said.

Netanyahu faces the world body after U.S. President Barack Obama disappointed some Israelis, in his own address to the annual assembly, by not calling for a deadline to be imposed on Tehran - though he did say time for diplomacy "is not unlimited".

Israel sees a mortal threat in a nuclear-armed Iran and has long threatened to strike its arch-foe pre-emptively, agitating war-wary world powers as they pursue sanctions and negotiations.

Complicating Netanyahu's strategy have been his testy relations with Obama as a U.S. election looms, and the reluctance of many Israelis to trigger a conflict with Iran, which denies that it is seeking to develop nuclear weapons and has pledged wide-ranging retaliation if attacked.

Though he has not previously detailed when Israel might be willing to go to war, Netanyahu has said Iran could have enough low-enriched uranium by early 2013 to refine to a high level of fissile purity for a first nuclear device. Read more....
Posted by Economic Analyst at Thursday, September 27, 2012