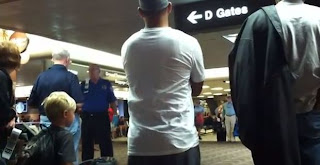 The TSA’s bizarre new policy where it orders travelers who have already passed security to “freeze” on command has been caught on camera, with the clip illustrating once more how the federal agency has implemented a series of ludicrous policies that seemingly have no other purpose than to act as an obedience test for the traveling public.

The video shows the final 24 seconds of a 2 minute period during which travelers were ordered to “freeze” by TSA workers and were not allowed to move.

One TSA screener is heard to say, “stay right where you are,” at a man who is walking through the airport, as the other static travelers look on in bewilderment.

According to the You Tube user responsible for uploading the clip, “This video was shot within the “secure” area of the terminal, BEYOND the security gate.”

“Note that the TSA “guard” is offering no explanation, only giving harsh threats and orders to stay still. Note that there was NO event or threat taking place of any kind,” he adds.

As we have previously highlighted, the “freeze” policy, which has been experienced by numerous travelers across the country, is known as Code Bravo Sierra or simply Code Bravo by the TSA. Read more...
Posted by Economic Analyst at Friday, September 28, 2012