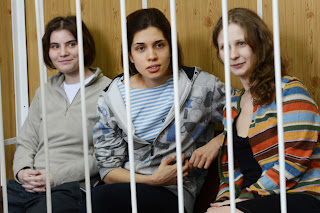 The jailed Russian punk rock group Pussy Riot “did not gain international fame through their musicality per se.”

That insight—none too surprising if you’ve ever clicked on a Pussy Riot video on YouTube—appears in an academic paper (pdf) by three electronic-commerce researchers from the University of Texas, Austin. The 45-page paper, filled with equations and Greek letters, explains how being deliberately offensive can help a video break through the clutter on YouTube, where 72 hours’ worth of video are uploaded every minute. “Most viewers were drawn to [their] videos out of curiosity,” not a desire to watch a high-quality clip, write professor Andrew Whinston and PhD students Liangfei Qiu and Qian Tang.

Not everyone aspires to be Pussy Riot, which staged such provocations as trespassing in a Russian Orthodox Church—a performance that drew two-year prison sentences for three band members. But Whinston, an economist who is a professor of management science and information systems, says it’s important for marketers to understand the various qualities that make one video go viral and another go unnoticed.

Google’s (GOOG) YouTube is quickly becoming not only a major commercial site, but a place where people can launch careers, Whinston notes, pointing to the success of people like Michelle Phan, who posts makeup tips on her own channel on YouTube. Read more.....
Posted by Economic Analyst at Sunday, September 23, 2012