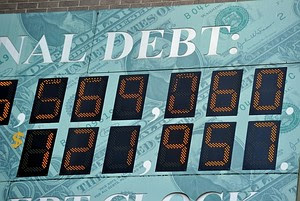 Wow! We’ll soon cross Sixteen Trillion Dollars in Federal Debt! S-i-x-t-e-e-n T-r-i-l-l-i-o-n D-o-l-l-a-r-s. That’s a lot of vote buying even for Washington. Is this ruin? Have we indentured our children into servitude? Solomon warned borrowers will be slaves to their lenders. Add $120 plus trillion in unfunded forthcoming liabilities and, well, we’re doomed.

Yet, as significant as this looks, and sixteen trillion of anything cannot be insignificant, the economic repercussions are the least of America’s worries. We still finance this cheaply. Rates on Treasuries remain low. Moreover, America endures as the world’s preeminent economic engine.

As resources filter through the state’s machinations, liberty and prosperity are sacrificed to political ends. Massive debt is economically bad, really bad, and perhaps even hopeless; but much, much worse is what this reveals about America’s moral, cultural and political decay. Read more.......