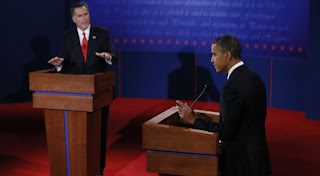 That 67 million, however, falls very short of the Mother of All Presidential Debates: the Oct. 28, 1980 smackdown between President Jimmy Carter and Ronald Reagan, which had drawn a whopping 81 million viewers.

About 12 million of the 67 mil who watched President Obama square off with GOP presidential hopeful Mitt Romney at the University of Denver were aged 18-34 years. Nearly 31 million of them were 55 years or older, Nielsen reported Thursday.

The debate was carried live across 11 networks; Telemundo aired it on tape delay.

In a tight race at the top, ABC appears to have, once again, snagged the most viewers to the first presidential debate of this election cycle — like it did four years ago. About 11.25 million people watched Romney vow to axe Big Bird, on ABC.

That’s up a tick from four years ago when 11 million people watched Sens. John McCain and Barack Obama in their first face-off, which had also been moderated by PBS’s Jim Lehrer. Lehrer got better reviews in ’08.

This time, ABC was closely followed by NBC, with about 11.1 million viewers – up a lot from its 7.1 million of four years ago. Read more....
Posted by Economic Analyst at Friday, October 05, 2012