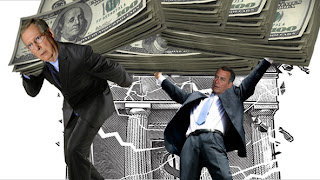 From a conservative point of view, the best thing for Republicans to do is to stop playing chicken over the deficit and debt ceiling and accept a compromise with the Dems, even if it means accepting new revenues. Here’s why.

As I write this, the showdown over the debt limit has entered the firing squad stage where executioners point their weapons at a prisoner standing against a wall. Democratic and Republican negotiators have started firing rhetorical volleys at each other, even as catastrophic default by the United States Treasury slouches from unthinkable towards unavoidable. If the parties can’t or won’t compromise over the debt ceiling, then the markets, the economy and America’s credit standing will end up dead, and the only thing left standing will be the deficit. If that happens, I’ll blame Republicans—for letting the country down and betraying conservative economic principles.

Yes, of course, both parties share blame over the debt. But the only reason we are even discussing a default on U.S. debt is that Republicans have insisted on $2 trillion in debt reduction as a condition for supporting a $2 trillion debt ceiling hike—and then taken a negotiating stance that makes coming close to $2 trillion very difficult.  The Dems have dutifully coughed up $1 trillion in spending cuts over 10 years and asked to be met partway by additional revenues. The Republicans, however, seem to believe they must oppose any revenue increase, even if accomplished by closing tax loopholes many  of them have long sworn to eradicate.  Risking a catastrophic default to preserve corrupt loopholes is not only stupid economics; it’s stupid conservative economics. Read more....
Posted by Economic Analyst at Saturday, December 08, 2012