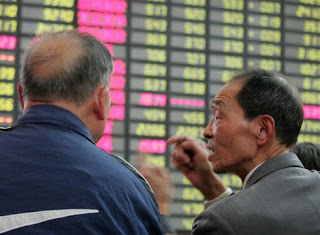 Foreign ownership of U.S. Treasury securities rose to a record level in October, a sign that overseas investors remain confident in U.S. debt despite a potential budget crisis.

Total foreign holdings of U.S. Treasurys rose to $5.48 trillion in October, the Treasury Department said Monday. That was up 0.1 percent from September. Still, the increase of $6 billion was the weakest since total holdings fell in December 2011.

The new figures show that investors are still seeking the perceived safety of U.S. Treasurys, even as lawmakers and President Barack Obama remain at odds over whether to raise the U.S. borrowing limit as part of a broader budget deal.

But economists also said the slowdown in purchases of Treasury securities suggests that investors are more willing to buy other debt, including from European governments. That might indicate that fears of a financial catastrophe in Europe are easing. Read more....
Posted by Economic Analyst at Tuesday, December 18, 2012