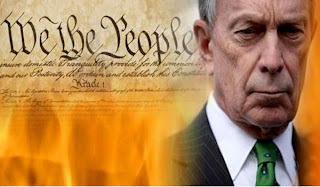 New York mayor and noted gun-grabber Michael Bloomberg went on Meet the Press today and told Obama he should skirt Congress and the Constitution and take executive action against firearms owners in the United States.

“It’s time for the president, I think, to stand up and lead and tell this country what we should do — not go to Congress and say, ‘What do you guys want to do?’ This should be his number one agenda. He’s president of the United States,” Bloomberg said.

“What the president can do is number one, through executive action, he can order his agencies to enforce the laws more aggressively.”

Issuing an executive action, unlike an executive order, does not modify a law. Executive actions, a Obama administration office told NBC News in October, concern “regulation, enforcement, statements of policy… and numerous other things.”

Obama, unlike his predecessors, “is not expanding executive power to meet the demands of an external crisis. Instead, he is counteracting a new pattern of partisan behavior – nonstop congressional obstruction – with a new, partisan pattern of his own,” Andrew Romano and Daniel Klaidman wrote for Newsweek prior to the election.  Read more....
Posted by Economic Analyst at Tuesday, December 18, 2012