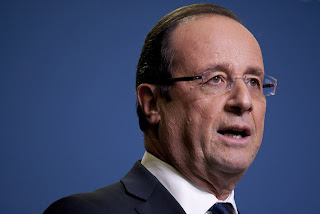 The tax, one of Hollande’s campaign promises, had become a focal point of discontent among entrepreneurs and other wealth creators, some of whom have quit French shores as a result. The ruling comes as the president seeks to cut France’s public deficit to 3 percent of gross domestic product next year from a projected 4.5 percent this year.

“Politically, this has an impact because it was a symbol for French public opinion, and was considered abroad as the emblem of French tax excess, of French tax hell,” said Dominique Barbet, senior economist at BNP Paribas SA in Paris. “In deficit terms, it’s truly negligible.”

The court said Hollande’s plan would have added extra levies of 18 percent on individuals’ incomes of more than 1 million euros ($1.32 million), while regular income taxes and a 4 percent exceptional contribution for high earners would have been based on household income, an e-mailed statement shows. Read more...
Posted by Economic Analyst at Monday, December 31, 2012