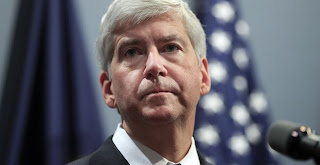 On December 14, the very day twenty children and seven adults were killed at Sandy Hook Elementary School in Newtown, the Michigan State legislature enacted a bill that would have allowed the concealed carrying of firearms in traditionally gun-free zones:

The Michigan Legislature has enacted a bill allowing people who undergo extra training to carry concealed weapons in places such as schools, churches, day care centers and sports stadiums where they previously were off-limits.

Another provision would eliminate county concealed weapons licensing boards, with sheriffs taking over their duties.

Under the bill, people who concealed carry in gun-free zones would have to get enhanced training beyond basic requirements and spend additional time at the gun range.

That bill, which is by far one of the most sensible legislative actions this year, made its way to the desk of Michigan Governor Rick Snyder.