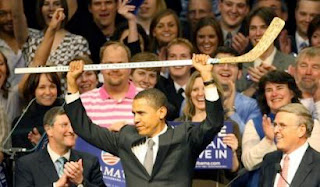 With our nation sliding ever closer to the fiscal cliff, President Obama and Speaker Boehner are engaged in a dangerous kabuki dance of political brinksmanship once again, with economic chaos waiting in the wings. They seem to have reached an impasse that might lead to a Thelma and Louise launch off the cliff for all of us.

Then again, it all sounds so very familiar: the blame game and finger pointing and accusations of failures to “reach out” for a middle ground, to bargain in good faith. As Yogi would say, it’s like déjà vu all over again. Yet another replay round of Groundhog Day from the debt ceiling brinksmanship of just last summer.

But, hope springs eternal that, after all the posturing and dueling press conferences and campaign-style staged visits with “ordinary citizens,” a sensible deal will be struck at the eleventh hour.

Meanwhile, hockey players have been locked out by the owners since September 15, resulting in the cancellation through December 31 of 527 games or 43% of the season. With the entire 2012-13 season in jeopardy, even expert mediators have failed to bring the parties together, resulting in talk of antitrust lawsuits and unfair labor practice refusal to bargain charges. The prolonged battle may escalate to the courts and the labor board as negotiations founder.

With both sets of talks stuck in neutral and dire outcomes awaiting a failure to reach an agreement, President Obama had the temerity to lecture the NHL and NHL players’ union on their failure to reach an agreement. (That dressing down, coming from a devout pickup basketball player and huge NBA fan, probably was all the more galling to hockey league owners, players, and fans alike.) Read more....