The Road To Recovery: Over One Million Americans Added to Poverty In Last Two Months 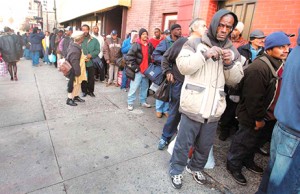 They’ll tout the latest unemployment numbers as evidence for the strength of America’s recovery, but despite their best efforts to fudge the numbers, the unreported reality is that we are so far gone it’s scary.

The decent into economic oblivion continues at a seeming unstoppable pace. Rather than bloviating about the supposed jobs created in the last month being a clear sign of economic recovery, perhaps a more informed look at how bad things are in modern-day America is to consider the amount of people requiring the aid of federal and state governments to put food on the table and help make ends meet:

The just reported foodstamp number for September was a doozy, with 607,544 new Americans becoming eligible for foodstamps, as a record 47.7 million Americans are now living in poverty at least according to the USDA.

The monthly increase was the highest since May 2011, and with August’s 421K new impoverished America, over 1 million Americans made the EBT card their new best friend.

It is unclear just which atmospheric phenomenon will get the blame for this unprecedented surge in poverty, which comes at a time when the pre-election economic data euphoria was adamant that the US economy was on an escape velocity to utopia. Read more....
Posted by Economic Analyst at Tuesday, December 11, 2012