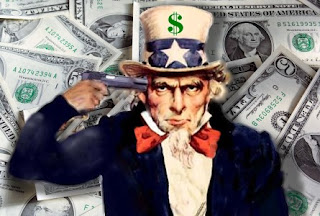 With up to $85 billion in monthly money creation — including $40 billion a month in purchases of mortgage-backed securities — the Fed is now wholly committed to the creation of money out of thin air to cover old debts.

Mathematically, this financial death spiral can only end in sheer catastrophe.

This massive money creation tactic is the Fed’s last-ditch plan to desperately try to save the economy.

“I think the country should have panicked over what the Fed is saying that we have lost control,” said Ron Paul, “and the only thing we have left is massively creating new money out of thin air, which has not worked before, and is not going to work this time.”

Schiff is right. This is financial suicide.

It’s also highly offensive to anyone who can actually do math (which, sadly, isn’t that many people these days).

Where is the well-placed outrage from the media or the people when it is actually justified and sorely needed?

Bernanke’s announcement that the Federal Reserve will embark on an open-ended scheme to purchase $40 billion in mortgage-backed securities each month has been touted by the establishment media as the beginning of “QE3.″ Read more....
Posted by Economic Analyst at Saturday, December 08, 2012