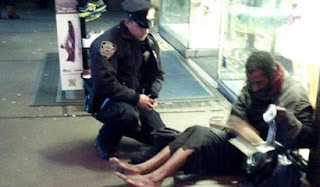 Jeffrey Hillman is a man who shambles the streets of New York City looking quite unkempt, drab, and hopeless. He panhandles sometimes and mutters to himself. Frankly, he looks a wreck and apparently often in need of a pair of shoes. On cold winter nights he gets them.

One cold November night Officer Lawrence DePrimo spotted Hillman seated shoeless on the pavement of Times Square, and the young policeman left his post, went into a store nearby, and bought Hillman a pair of shoes costing $100. He even helped Hillman put them on. A tourist snapped a picture of DePrimo doing this, and the picture appeared on Facebook. It went viral, and was seen around the world -- a young New York City cop, putting shoes on a beggar.

What an auspicious way to begin the Christmas season. Mayor Michael R. Bloomberg declaimed, "That's what they're trained to do -- help people." Commissioner Raymond W. Kelly was more appreciative. He gave the 25-year-old policeman a pair of police department cuff links at a private meeting. Others now claim to have bought Hillman shoes over the years. My guess is he has got a stash of them some place. Possibly he is planning to open a shoe store. Assuming, that is, that his tax rate does not go up under President Obama.

We are learning more about Hillman as time goes by. He is not homeless. The New York Daily News reports that the 54-year-old lived from 2009 to 2011 in transitional housing sites called "Safe Havens." Owing to his status as a veteran, he then secured his present apartment through the Department of Veterans Affairs. Veterans outreach services have continued to try to help but apparently for naught. A spokeswoman for the city's outreach services reported that Hillman "has a history of turning down services." Doubtless some day he will become ill, and the city will put him in some government program to recuperate, possibly Medicaide, possibly Obamacare. Read more....
Posted by Economic Analyst at Saturday, December 08, 2012