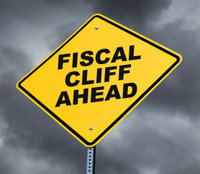 If I didn’t know any better, I’d think there’s a small but growing group of people in Washington who think it would actually be good if we temporarily went over the fiscal cliff.

I say that because I am seeing a smattering of articles recently suggesting that somehow going over the cliff “won’t be all that bad” or that we’re “really just talking about cuts that need to happen in the first place.”

President Obama seems to think the same way judging by the fact that he’s dug in his heels, telling the GOP there will be no fiscal cliff bargain that doesn’t include tax hikes.

Now noted budget hawk Republican Senator Tom Coburn has broken ranks, noting that he’d rather see rates rise because that “will give us a greater chance to reform the tax code and broaden the base in the future.”

I find that to be an absolutely appalling argument given how much further the president’s proposals will squeeze the middle class.

As Fox Business Network’s Gerri Willis, an expert on consumer and personal finance issues, recently pointed out to me, the average middle class tax rate is already 43.12%, according to the non-partisan Tax Foundation.

Beyond that, Willis says if we do go over the cliff, the average middle class tax burden jumps to nearly 50%.
Read more.....
Posted by Economic Analyst at Tuesday, December 11, 2012