Zombie Entertainment: A Lesson in Cognitive Dissonance and the Red Pill 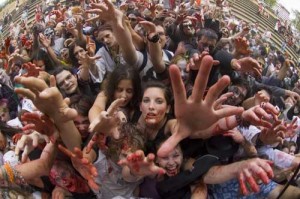 Zombies are the new vampires in the entertainment world, but unlike pop culture vampires, they don’t sparkle, they aren’t sexy and brooding, and you don’t want to turn into one.

The most popular show in cable TV history is The Walking Dead. Dozens, if not hundreds, of zombies are slain in every episode. Head shots are taken with no more compunction than swatting as mosquito before it lands on your arm. An axe to the skull, a pick through an eye socket, blunt objects, arrows, daggers – anything goes. What’s more, it doesn’t matter if the zombie is a man, woman or child – it must be killed immediately as it staggers hungrily towards you.

Even the US military is getting into the spirit of the Zombie Apocalypse, holding mock disaster drills with the shuffling horde as the enemy.

It’s all in the name of fun, right? Simply entertainment and anyone who says otherwise needs to lighten up, right?

In 1971, a 2 week experiment was funded by the US Office of Naval Research to study the effects of becoming a prisoner or a prison guard. A mock prison was set up at Stanford University, and 24 students took part in the experiment, half taking on the roles of prisoners and the other half, guards in the infamous Stanford Prison Experiment. Read more....
Posted by Economic Analyst at Wednesday, December 12, 2012