Sorry Protesters: Your Jobs Are Being Sent To China And They Aren’t Coming Back 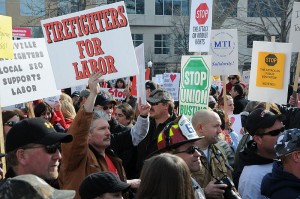 Did you see the huge crowds of protesters that flooded the Michigan Capitol on Tuesday? They were there to protest two bills there were being considered by the state legislature that would limit the power of unions in the state. Michigan lawmakers approved the bills and this absolutely infuriated the protesters. There is a lot of passion on both sides of this debate, but I am afraid that both sides in this debate are missing the bigger picture. If we keep shipping millions of our jobs to China, there isn’t going to be work for anyone no matter how much power unions have or don’t have. During the month of October, the U.S. trade deficit increased to 42.2 billion dollars. Our trade with China accounted for most of that deficit. Our trade deficit with China in October increased to a new all-time one month record of 29.5 billion dollars. Nearly 30 billion dollars that could have gone to U.S. businesses and U.S. workers went to China instead.

Since 1975, a total of about 8 trillion dollars that could have gone to U.S. businesses and U.S. workers went to the rest of the world instead. Shiny new factories are going up all over China, and meanwhile our once great manufacturing cities are degenerating into desolate wastelands. So what is going to happen when all of the good paying manufacturing jobs are gone? Are we all going to fight bitterly over whether we should unionize the low paying jobs that remain at places such as Wal-Mart and McDonalds? Such an approach is not going to bring back prosperity to America. We desperately need to start building things and start creating real wealth inside this country once again. We desperately need to stop sending tens of thousands of businesses, millions of jobs and trillions of dollars of our national wealth out of the country. Unfortunately, I don’t see anyone out there holding protests about our trade deficit. Nobody really seems to care, so our economy will continue to bleed good jobs and the middle class will continue to be destroyed.

The funny thing is that the workers that are out there protesting these union bills actually voted for the politicians that are killing their jobs. Both parties are married to the one world economic system and the “free trade” agenda, and Barack Obama has been one of the worst offenders. He has been pushing for more “free trade agreements” throughout the past four years, and yet union workers continue to support him enthusiastically. Read more....
Posted by Economic Analyst at Wednesday, December 12, 2012