Despair Inside the Beltway 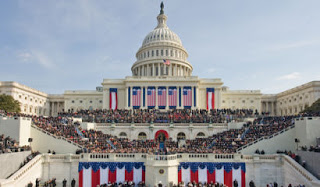 Reflections on the upcoming second inauguration of President Obama.

The second inauguration of our sitting president will take place this coming weekend as this is being written. It is a time of great happiness for most of my neighbors and friends inside the beltway, indeed for most people in the country.

But I find myself in despair for our beloved country. It is quite likely that a large minority of the nation’s citizens agree with my pessimistic mood. The reasons for that despair are not difficult to discern.
Our beloved country is in terrible condition. The awful evidence is easily seen everywhere, for those willing to look. Our economic situation is unsustainable. Yes, the government of the richest country in the history of the world is, by all reliable measures, broke. Our national government cannot pay its bills and every day sinks deeper in debt because it is addicted to spending at extravagant rates. We are on our way to becoming the sad equivalent of Greece or another failed state.

There is plenty of blame to pass around for this condition and it should be shared by Democrats and Republicans, by George Bush and by Barack Obama, but the major part of the blame must be placed squarely on the shoulders of Mr. Obama and his administration. He has been in power for four years and he promised that he would deal with all of our major problems. He has not done so. Read more...
Posted by Economic Analyst at Wednesday, January 16, 2013