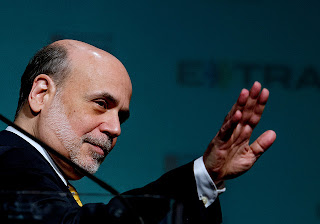 Federal Reserve Chairman Ben S. Bernanke’s unprecedented bond buying pushed the Fed’s balance sheet to a record $3 trillion as he shows no sign of softening his effort to bring down 7.8 percent unemployment.

The Fed is purchasing $85 billion of securities every month, using the full force of its balance sheet to stoke the economic recovery. The central bank began $40 billion in monthly purchases of mortgage-backed securities in September and added $45 billion in Treasury securities to that pace this month.

“We’re in uncharted territory,” said Julia Coronado, chief economist for North America at BNP Paribas SA in New York, and a former Fed economist. Even as “the easy money will flow through financial markets and into the real economy at some point and lift us to a better growth trajectory,” the U.S. faces “a lot of risks,” she said.

The Fed’s total assets climbed by $48 billion in the past week to $3.01 trillion as of Jan. 23, according to a release from the central bank yesterday in Washington. The announcement came as the Standard & Poor’s 500 Index closed at the highest level since December 2007.

Fed policy makers have voiced increasing concern that record-low interest rates are overheating markets for assets from farmland to junk bonds, which could heighten risks when they reverse their unprecedented bond purchases.

Yet with unemployment still high almost three-and-a-half years since the economy began its recovery, Fed officials are expected to affirm their accommodation when they meet in Washington to discuss policy on Jan. 29-30. Read more....
Posted by Economic Analyst at Friday, January 25, 2013