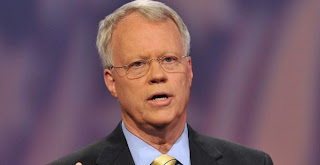 Georgia congressman Paul Broun hit out this week at his favourite target, President Obama, stating that he has no concept of the US Constitution.

In an interview with the Atlanta Journal-Constitution, Broun, a frequent critic of Obama noted “I think my role is to uphold support and defend our Constitution.”

“The Constitution I uphold and defend is the one I carry in my pocket all the time, the U.S. Constitution,” Broun added.

Congressman Broun has been a thorn in the side of Obama’s agenda since day one.

In 2009 he warned attendees of a town hall event that the Obama administration was planning to use a pandemic or a natural disaster to implement martial law in the United States. Read more....
Posted by Economic Analyst at Friday, January 25, 2013