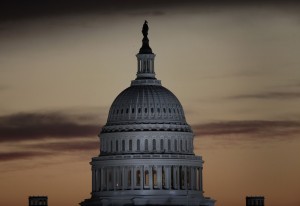 Lawmakers agreed to freeze congressional salaries as part of the short-term deal they reached to avoid the fiscal cliff, but a new debt-ceiling proposal introduced late last week could affect their pay more severely — at least in the short-term.

The House is expected to vote Wednesday on a GOP bill that would suspend the nation’s borrowing limit until May 18. That measure would also withhold lawmakers’ paychecks starting on April 15 — which happens to coincide with “tax day” — until they strike a comprehensive deal on taxes and spending policy.
The money held back would go into escrow, meaning lawmakers wouldn’t miss out on it altogether. They could collect the funds once they’ve negotiated a longer-term budget plan.

The debt-ceiling bill would allow the government to borrow more money while providing cover to Republicans who don’t want to raise the nation’s borrowing limit without serious spending cuts in return.
The plan lets GOP lawmakers off the hook on a technicality. The nation avoids default, and Republicans can argue that they didn’t vote to raise the debt ceiling.

For what it’s worth, the measure only allows the Treasury Department to borrow what the government needs to meet its immediate obligations, and administration officials would be prohibited from stocking up on extra cash during the debt-limit suspension. Read more...
Posted by Economic Analyst at Wednesday, January 23, 2013